“Music has always been considered to be the fittest medium to express the joys and sorrows, the languishing hopes and despairs and the thousand and one little vanities of the human race…[it] transforms the material world into an ideal world in which both joy and sorrow become equally beautiful.”
-G.H. Ranade

Rasa: “The sap or juice of plants, juice of fruit, any liquid or fluid. The best or finest or prime part of anything, essence, marrow; elixir, potion; the seminal fluid of Shiva; charm, pleasure, delight; the taste or character of a work, the feeling or sentiment prevailing in it…the synergetic result of a combination of distinct elements. Rasa is not a single, elementary flavor, but the refined combination of several ingredients submitted to a process…the ingredients cannot be perceived separately.”
-J.L. Martinez 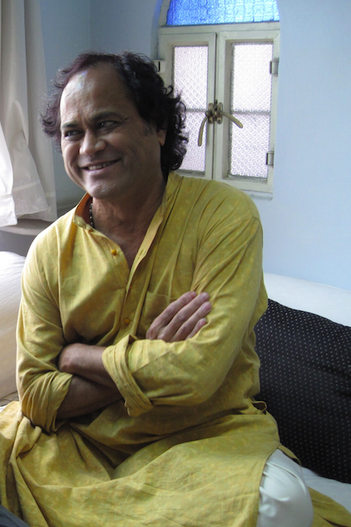 There are basically only four or five moods that you express in music: the sensual/romantic, separation, sorrow, meditative, and heroic. Other rasas are not so obvious, they are hidden in music. You might feel it. Like saval-javab[1] can be humorous. I consider alap the most difficult part, that’s the deepest part of music, it’s where you go deeper into the raga aspect, which deals with the mood. It could be very spiritual, very meditative. You feel like it affects your mind, like how the concept of raga is “that which colors the mind,” so it evokes a certain sentiment in you as well as the listeners. And that’s what the musician tries to evoke, that’s the true test of a musician, to become one, to make some kind of contact with the audience.

However, it may work or it may not work sometimes. The prescribed mood is there…morning ragas are very childlike because you don’t know how the day is going to be, there’s more of this bhav, this feeling of surrender or devotion, I bow to this music, I surrender to it, I don’t know what’s going to happen. Later, evening ragas have more of a playfulness, an excitement, liveliness, or joy. In my experience, it varies, it’s never the same, which shouldn’t be the same, actually, because depending on the place, how receptive you are, how receptive the audience is, how educated the audience is. It’s like a prayer, it’s like when you run for a while, it’s an effort. But when you’ve run for a while, there is a feeling of relaxation, like you’ve used all your body, and you can breathe…it’s the same kind of approach because you have to let yourself be free for a while because, unless one is a yogi, there are a lot of things to distract. It requires a tremendous amount of concentration and dedication to be in that mood.

Usually when I have a serious performance, I don’t practice that day, I will think about music and not talk too much and just be alone, so that I will have a new approach to the same raga. It’s very exciting to have a fresh approach.

As far as the rasa of the piece, it happens sometimes, sometimes it’s only on the surface. In my experience, people often feel emotions other than what rag is supposed to convey. You explore, this is like an ocean, so it all depends on how imaginative you are, how emotional you are. But at the same time you have to maintain the purity of the rag. When it happens, it’s a very inner experience. What you feel comes out to the audience. They are coming to listen to you, so you have a responsibility to give your best to them, but so many things go wrong. Like, I’m in a great mood, but suddenly the power goes off, people are walking around. If you have a very well-behaved, a very cultured audience, then it has more presence. And as a result you will feel more.

Alap is very sensitive, after alap it becomes more playful, it gets very intellectual because you’re figuring out calculations and rhythmic patterns. I think the deeper part is to just give in. My teachers always said that, surrender to music, don’t think that you’re great, there’s always someone who is greater than you. Humility is a very good approach to music. When you surrender, there is more to receive. When you fight, you just fight.

I think I’m very sensitive, and I get affected very quickly. I think maybe oversensitivity is not so good sometimes, so I try to keep it balanced, it has to do with being in touch. I wouldn’t enjoy having twenty concerts in a month, because it would feel like a job or work rather than something special. But still, personally I think I like playing the best is what I love the best, although that might not necessarily be what I learned from my teachers. As you mature as an artist, your selection of ragas changes according to your nature, to your personality, you present it in your own way. I have a totally different repertoire that a lot of people don’t play. I choose to present deeper, more emotional aspects of music. I don’t know if it’s successful, but I’ve been told that it is, that they like the selection, that it’s very unusual, old, rare.

Any particular success that you recall?

It’s a self-satisfaction type of thing, you know, if you’re happy, then I feel your happiness. If you are sad, that would also affect me. It’s a matter of transmitting your mood. It doesn’t happen that often with musicians that they are satisfied with what they do, and when it does happen it’s out of surprise or it’s like a miracle or by the blessings of your teacher. But it has happened to me a few times. In Germany I was doing a concert in Berlin, and this woman in front, they had never heard Indian music, but tears came to her eyes because she was so moved by the playing, by the music. For me those instances are very special tests or blessings. It’s like the different kinds of cries: people cry out of sadness, people cry out of happiness. When it affects like that without people really knowing about the music, that’s the test, that’s the reward a musician feels. Other times, I practice so much, and on the stage it didn’t have what I expected. I no longer have expectations. It’s a matter of a mental state, how relaxed you are, how concerned you are, how confident you are, all that has an effect on the audience as well. Sometimes so special that you don’t want anything afterwards, a very high spiritual feeling as if you’re very light, you are weightless, nothing aches in your body and you are into it. 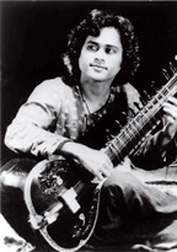